Notes From the Underground 2 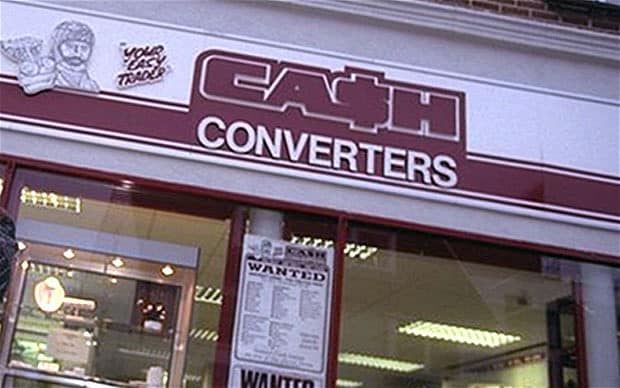 I found a note today I had written to myself about a year ago. It said, simply: "$10 loans". I knew immediately what it meant. Let me explain.

I was walking down Puckle Street in Moonee Ponds. Yes, that same suburb so patronisingly lampooned by Barry Humphries (a rich twat from Camberwell). Well fuck Barry Humphries, I LOVE Moonee Ponds and especially Puckle Street: it's beating heart. A true melting pot of cultures, a place where nobody is judged, where everyone looks out for one another and where those shunned by brutal government policies and vicious capitalist dogma can visit Cafe 2000 just around the corner with a few measly coins and be treated with the warmth, dignity and respect they would never find elsewhere.

Unfortunately not all business operators are as kind-hearted as Matt and Sal from Cafe 2000. About half-way up Puckle Street as you head towards Moonee Ponds Station, on the left-hand side, just before the Commonwealth Bank stands one of the most disgusting emanations of consumer lending - Cash Converters. On the front window of this den of stolen goods and usury was a large sticker, placed in such a way as to avoid attention but obviously forced upon them by some sort of regulation. The sticker detailed the interest rates charged for their sub-sub-sub-prime short-term loans. I honestly can't recall the interest rates themselves, but as you can imagine they are not exactly "competitive". In any case it wasn't the outrageous APR's that compelled me to write a note to myself. Cash Converters will lend poor sods as little as $10. This distressed me greatly. The fact that a company can make money offering such a "service" is a terrible indictment on a society that appears hopelessly adrift, fractured and divided to such an extent that there are people who cannot find a fellow human being to loan them a lousy fucking 10 bucks!

As a younger man, I spent many hours in inner-suburban pubs. Yeah they had their downsides - dens of masculinity, chauvinism and all that, brutal beatings, scammers and charlatans etc etc etc....but they were also places where people (OK let's just say "men") could go to forget the shitty back-breaking labour they had to endure to survive, the societal pressures and stark economic realities. They were places where men could find someone to talk to, about anything that was on their mind. This was not Twitter or Fascebook, where your identity must be defined in such simplistic terms to suit the machine. Here a man could be complex, emotional, unique - and nobody gave a fuck. I remember fondly the pub I frequented most in Moonee Ponds' northern neighbour Essendon. Any Friday night would see the place packed with local odd-bods - social status, colour, creed, political persuasions were all well-represented. And everyone got along fine. Discussions were lively, opinions expressed without fear - you didn't necessarily agree with everything you heard, but even the biggest dickheads were afforded the chance to speak and no-one was written off as a human being, no-one was "blocked" or "unfriended" on the basis of their words. Actions on the other hand......

Anyway my point is that if I ever needed a loan to get me through till payday, there were never any issues. No interest was charged, but credit would be cut off as a result of non-payment (which is only fair). And if I had dough, I'd be only too happy to help out a fellow patron. This was the non-profit, human version of the Cash Converters "pay-day" loan.

One hazy night at the Railway Hotel in North Melbourne I loaned a bloke I played darts with $50. He never paid me back. That was about 15 years ago. I saw him the other day, in, of all places, Puckle Street Moonee Ponds. The years had been awfully hard on him. I noticed the look of recognition in his eyes, which were quickly averted. I called out to him: "Ray, how are ya mate? I haven't seen ya for years!" He smiled a toothless grin. "I think I might owe you 50 bucks" he said. "Forget it mate" I laughed. "What's 50 bucks anyway? You wanna go for a beer?"

Had Ray borrowed $50 from Cash Converters he would have owed $2.7 TRILLION. I KID YOU NOT.